The Viper series fighters were the product of a design competition on the part of the Colonial Military that was seeking a replacement craft for their four man Hunter Class Attack Boats. These sublight ships were designed primarily as torpedo boats and while they had early success in the Cylon war, casualty rates had begun mounting steadily in the face of improved Cylon firepower.   The concept of one man fighters was not new to the Colonials, it was a standard design for atmospheric craft, but technology had, to that point, not permitted small fast ships for vacuum and deep space operations. New designs in power plants, life support, sensors and thrust compensation allowed new possibilities. Of the designs submitted for review, the Viper was the clear winner.

The first Vipers, the Mark I, II and III series were strictly sub light ships. Despite this limitation they were a huge success. Improvements incorporated in each series paved the way for the modern Vipers. So successful were the early Vipers that the Cylons paid the compliment of imitation. Early Cylon tactics did not employ small craft like Raiders and Marauders, instead relying on ‘cruiser style’ tactics of large ships hammering away at large ships.

Mark I
The Mark I was a sub light fighter, slow and sluggish by modern standards, it still ran rings around the Cylon warships of its time. Armed with four chain guns and one medium torpedo it was small and fast and hard to target, allowing it to close with an enemy by passing through its fields of defensive fire. Several variations were built, designed for alternate weapon systems, Mark Ib had two larger canon instead of four chain guns, Mark Ie carried four lighter rockets rather then one torpedo, Mark Ic was equipped with early sensor jamming technology and would accompany a flight of other Vipers to aid in gaining surprise.

Mark II
The Mark II was an upgraded Mark I with the first Laser cannons and improved thrusters and extended flight duration. The lasers, though weak by modern standards, eliminated the need for the weight of ammunition. Like the Mark I there were a number of variations available.

Mark III
In the Mark III, and its variants, the lasers were upgraded to something resembling modern Medium Lasers. Improvements in the power plant allowed for increased flight times and more shots from the lasers. Because of this step up in firepower the need to mount torpedo was reduced and it became common for the bulk of the Vipers in a flight to not have torpedoes or rockets.

Physically the Mark I, II and III were all but identical. They were smaller then modern Vipers with two engines instead of three. Today true Mark I are museum pieces. Most were upgraded, being re designated as Mark Im, with the early lasers. These upgraded Mark I and the Mark II and III were built by the thousands and saw service, both as a main combat arm and later as system defense forces and as military aid packages to the Delphian Empire. Though Mark I and II were very rare, the III series was still in use in various Agro colonies, prison facilities and obscure systems right up to the end of fighting. 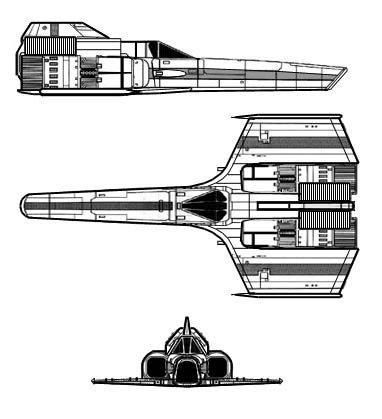 The Mark IV series was a major overhaul in Viper design. Improved power banks and miniaturization of the Hyper Speed drives meant that the Mark IV was the first to incorporate limited Hyper Speed capability. The Mark IV added the third engine seen in modern Vipers. The Hyper Speed ability was very limited but proved such a huge tactical and strategic advantage that priority was given to improving its range. It was also the first Viper designed for application of the new Ablative Foam armor. This can be, and has been, added to older models, but without proper hull texturing it tends to flake off in atmosphere. Hyper Speed for the Mark IV was limited to 3x light speed, but being the only fighter capable of it meant that it was virtually untouchable. Later IV variants increased the Hyper Speed to 5x light speed. The Mark IV can sustain Hyper Speed for 15 centons. The Power Bank reserve permits a second run of 15 centons after a 50 centon recharge. 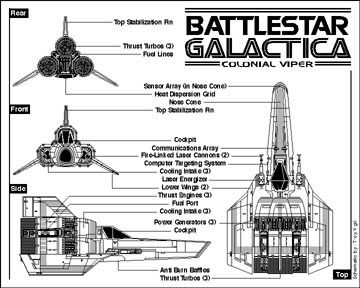 Virtually identical to the IV in most respects it had improved Hyper Speed duration and extra sublight boosters making it the fastest Viper yet built. Hyper Speed of the unmodifed Mark V was 9x light speed. With extra munitions (Mark Ve) it dropped to 8x. The Mark V can sustain Hyper Speed for 25 centons. The Power Bank reserve permits a second run of 25 centons after a 20 centon recharge. 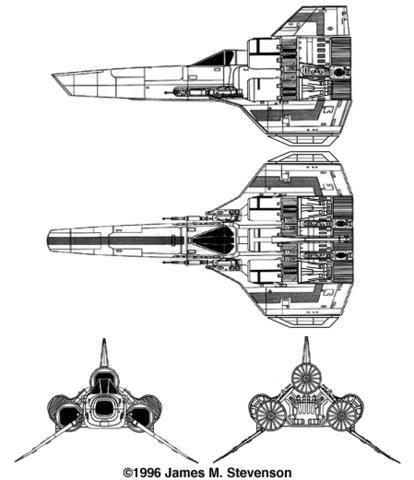 The Mark VI was a short lived series that had production ended early in favor of the Mark VII. The primary design feature of the VI was modification of the basic hull for carrying additional munitions. This served to change the Viper’s role from that of a fighter to a fighter bomber. Complaints of sluggish handling and higher then expected casualty rates brought an end to the series in favor of the VII which employed many of the VI positive features without the negatives. Fully loaded the Mark VI could reach a Hyper Speed of 9x light speed and after releasing munitions it could reach 10x light speed. The Mark VI can sustain Hyper Speed for 25 centons (45,000,000 metrics) The Power Bank reserve permits a second run of 25 centons after a 10 centon recharge. Its major weakness was in its sub light handling, sluggish acceleration made it vulnerable to new generation Cylon Raiders. 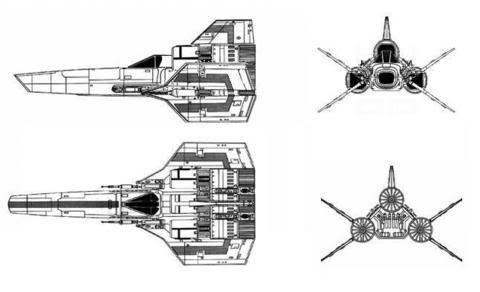 At the time of the final Cylon offensive this was the state of the art Viper. (Though many Mark IV and V’s were still in use.) The Mark VII were not only the fastest and most maneuverable of all the Viper types, it was the first to employ the Inverse Thrust feature. This has proven to be an immense tactical advantage that greatly increases kill ratios for the Viper pilots. The VII also has improved Hyper Speed range and speed. The Mark VII can reach a Hyper Speed of 10x light speed it can sustain Hyper Speed for 25 centons (45,000,000 metrics) The Power Bank reserve permits a second run of 25 centons almost immediately (10 centon recharge) permitting the Viper to appear, strike and retreat with great speed. 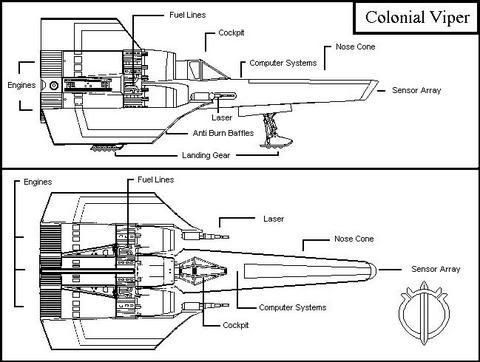 Like the earlier Viper models, the VII has had a number of variants built primarily employing extra lasers and munition racks. (The Inverse Thrust feature was retrofitted to most Mark V models producing the Mark Vg variant.) 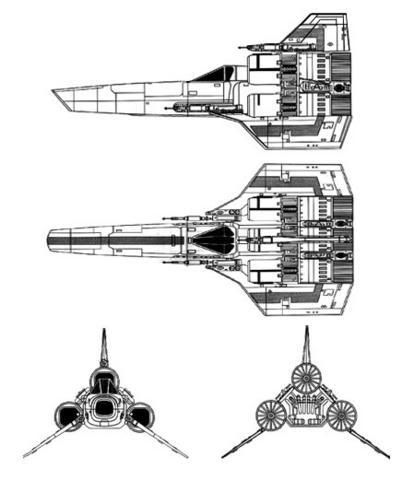 Since the destruction of the Colonies R&D work on Viper design has taken a back seat to maintaining what was available and keeping numbers up in the face of Cylon pressure. The Vipers of the Fugitive Fleet are primarily the Mark VII model. These were the newest, fastest and most maneuverable Viper that the Colonial Military had produced. The Galactica and Pegasus were loaded with these models. The Prometheus Aegis and the various Hydra and Gorgan class destroyers were equipped with older models, Marks IV and V as well as a few of the VII. The Mark IV s were long ago phased out for parts to keep the other Vs flying.
However, in the past few yahrens the R&D people have produced two new Viper designs of note.

Seeking to increase kill ratios by increasing speed and maneuverability, as well as being able to engage the enemy at greater distances from the Fleet, the Mark IIX added a fourth engine that allows short Hyper Speed runs of 11x light speed and greater sub light speed in combat. The IIX also has extra hull armor as well as the standard ablative coatings. Production has been very limited due to material shortages, hanger space issues and the need to redesign launch tubes to accommodate the bigger and heavier craft. At present only six are ready to be deployed. The Mark IIX can sustain Hyper Speed for 50 centons. The Power Bank reserve permits a second run of 50 centons after a 10 centon recharge. 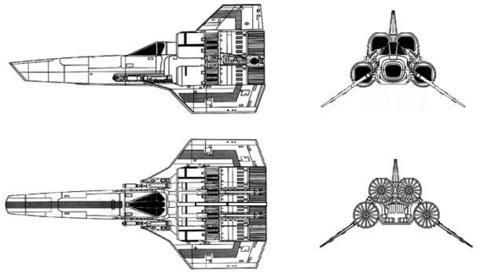 A radical departure in Viper design the Mark IX seeks to build a truly long range and independent fighter craft. Previous models had Hyper Speed engines capable of short runs. The IX is intended for very long runs, allowing it to strike at targets at vast distances without the need of supporting carriers. Sub light speeds are about the same as the IIX but Hyper Speeds of 12x light speed are easily maintained, even with a munition load. The Mark IX can sustain Hyper Speed for 100 centons The Power Bank reserve pemits a second run of 100 centons after a 15 centon recharge and a third run of 50 centons after an additional 15 centon recharge. After that it takes 1 centar to fully recharge. The Mark IX can do a complete recharge twice before refueling. This full recharge is something earlier Viper models cannot do at all without refueling.
Production is limited to prototypes at this point due to material issues as well as the fact that the bulky, six engine Viper can’t begin to fit in current launch tubes. 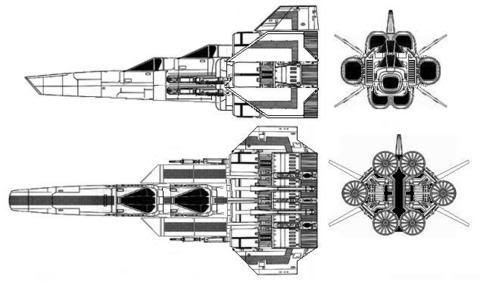 In the belly of a Viper is a storage compartment/Emergency Locker that has basic survival gear and supplies for the pilot to use in the event that he or she is forced down on a planet.

The Vipers of the Fugitive Fleet