There are a variety of freighter types in the Fugitive Fleet and they reflect only a small portion of the variety that plied Colonial Space before Cimtar.

Many freighters were actually Transports that had been outfitted with extra fuel capacity. These ships would often leave the external fuel tanks in orbit so as to ease landing, recovering the tanks after they left the surface. Transport Freighters, or ‘Transit Freighters‘ were cheap and common in the inner sectors of Colonial Space. Their main drawback was the size of their cargo holds. They generally aimed at niche markets or would contract with larger, modular freighters, to handle pick ups and drop offs that the bigger freighters did not want to take the time to do.

Modular Freighters attach cargo pods to the outside of their hulls and travel from system to system picking up and dropping off these pods. Some ships would land for these pick ups and deliveries, others would only handle Orbital contracts. 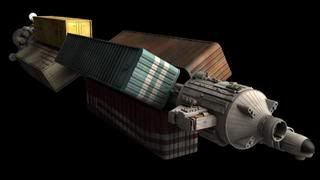 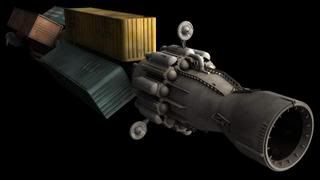 Closed Hull Freighters vary in size from landing capable to orbital monsters. The cargo could be in almost any kind of packaging, (sometimes it is alive!) and delivery and pick up is either through the loading bay doors or by cargo shuttle.