The Cylons do not use the term ‘Base Star’ or ‘Patrol Star’ or ‘Attack Star’ that is a Colonial designation. The Cylons call their craft ‘Base Ships’ and ‘Patrol Ship’ etc,. Similarly the Cylons do not assign names like ‘Hades Class.’ If they use anything it will be a number designation
In this section the terms ‘Base Star and Base Ship will be used interchangeably.

When the Colonials first encountered the Cylons, they found an enemy that built large battleships and hollowed out asteroids to use as warships.
Early Colonial tactics, though successful, proved costly in casualties. The Colonial military began emphasizing small, fast, highly maneuverable ships that could close with the bigger Cylon ships, deliver a powerful punch, then withdraw safely. Such was the success of these early Vipers that the Cylon Empire began copying Colonial tactics and systems.

Cylons do not make extensive use of missiles or torpedoes. Those they do use tend to be nuclear tipped. The exception to this rule is the Marauder Class Raider which carries a torpedo/rocket that can be used against other ships as well as against surface targets.
The Cylon ‘Medium Torpedo’ can be tipped with a nuclear warhead (common) and used against ships and surface targets.
Cylons rely heavily on energy weapons. The Neutron Laser they employ, though somewhat different in design then Colonial lasers, is basically the same in effectiveness. However. the Mega Laser is more powerful then the Colonial Heavy Laser. The technology has not been copied by the Colonials since the weapon gives off dangerous levels of radiation when fired. This radiation is harmless to a Cylon.

Neutron Lasers, though differing in many particulars, have similar effects to Turbo Lasers. Neutron Lasers, especially the Mega Neutron Laser, give off dangerous levels of radiation when used. This has prevented the Colonials from utilizing the technology. This radiation is harmless to a Cylon.

Light Neutron Lasers are rare in current Cylon service. The only documented use of the weapons is on Advance Raiders, the long range FTL recon/scouts of a Baseship. The choice here was obviously to provide attack and defense abilities without degrading its FTL abilities. The Light Neutron Laser is similar in range and effectiveness to a Light Turbo Laser. (They are found on some older Raiders.)

Medium Neutron Lasers are the staple of Cylon warships. Found on Raiders, Overhauls, Troop ships, cargo ships and Tankers. Similar to a Medium Turbo Laser in range and firepower.

Mega Neutron Lasers, or Mega Lasers, are found only on Baseships. These powerful weapons have greater firepower and range then a Colonial Heavy Laser. The weapon gives off dangerous levels of radiation when used and has a high residual level even when deactivated. The effective range of a Mega Laser is about 300,000metrics (186,000 miles.)

The Cylons do not employ Ablative armor at all. They rely on armor plating and Electronic Defense Shields. Further, they do not bother with compartmentalization, since a hull breech causes only minimal distress. Most Cylon vessels carry no atmosphere, except in special labs, guest quarters or prisons. A hull breech causes little problem for a Cylon ship and the presence of vacuum through most of the vessel inhibits fire and smoke damage.

Most Cylon fighter craft are NOT faster then light capable. They rely on the Base Star (or similar) to bring them to the scene of the battle. 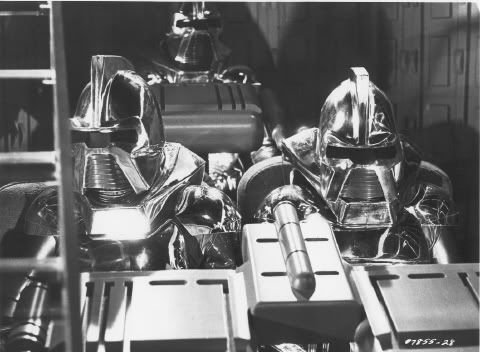