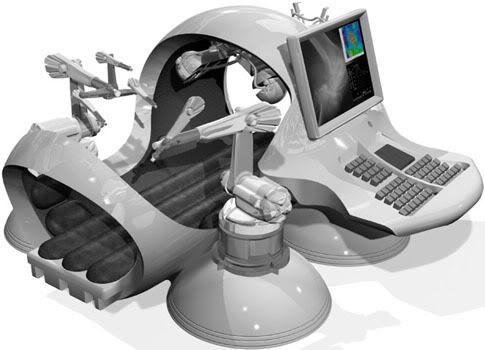 A computer assisted surgical center. When employed by a properly trained Medical Technician or Doctor the center can perform highly advanced and complex surgeries. With minimal supervision by any qualified medical tech the center can perform most major surgeries with considerable reliability and success. Even without a trained operator the Auto-Med can diagnose and perform the surgery and operations needed to save a life or to fully treat most minor injuries.

Small, portable, hand held scanner/diagnostic unit that can monitor BP, heart rate, temperature, blood sugars, brainwave activity and a number of other significant diagnostics. It can be used independently by a trained Med Tech or Doctor, or in conjunction with an advanced Medical Scanner, Auto-Med or similar equipment to which the probe remotely sends the readings. Transmission range is limited to about 80 metrics (50 miles) but the unit can link to a medium communicator for extra range. Detection/scanning range is only 1 metron (1 yard.)

A larger scanner that works in conjunction with a probe. The built in computer is able to analyze and diagnose, making recommendations for treatment and track the progress of up to 500 different patients. A built in communicator allows it to link with other Medical Scanners, Auto-Meds and larger computer systems. Transmission range is 800 metrics (500 miles) but can me linked to a medium range communicator or larger transmitter if needed. Scanning range is the same as the Probe.

Cryocase
This is a portable cryogenic storage case normally used for transporting organ transplants or similar fragile biological cargoes. Its interior can be configured to contain up to three large organs (heart, kidney, etc.) or twice that many smaller organs (eyes, for instance). It will preserve them as long as it has power, after which they will spoil within 2d+4 centons.
The cryocase is also suitable for transporting other products that need to be frozen — evidence samples or certain drugs, for instance.
The case is about the size of a large suitcase. When empty it weighs 10 lbs. and costs 2,000 cubits. A pair of C cells power it for 24 centars, or it can be hooked up to building power to run indefinitely.

Drug Analyzer
This handheld device has three functions. First it can be used to identify drugs and medications. The Analyzer will determine chemical composition, identify it by name if know, calculate concentrations and compare it for interactions and side effects of any other drugs selected.
The second function utilizes a tissue or blood sample from a subject, and can use these materials to determine what, if any drugs or medications are in the subjects system, their concentration and when the drug was taken.
The third function utilizes blood and tissue from a patient, along with other bio data (Height, weight, age, medical history) to determine appropriate dosages for the individual and determine any potential interactions with medications currently in the system.
Note: All of these functions can be performed by a Med Scanner or Auto Doc as needed. The most common use of a Drug Analyzer is by Security in identifying substances they encounter in the course of their duties.

Emergency Support Unit
The ESU is a semi-portable life-support system. If an injured patient is hooked up to it the ESU maintains the patient’s biological functions even if their organs are not functioning. In game terms, the ESU can keep alive someone who has failed a HT roll and died, as long as they are not at or below -5 x HT, or dead for more than five centons.
Attaching the ESU’s life support system takes (20 minus its TL) millicentons and requires the ESU to make a Physician roll (at -1 for every multiple of negative HT the patient is at below 0 HT, and a -2 per failed attempt). Success means the person is in a coma rather than dead, but will die if taken off life support; critical failure means the patient is dead. Revival from the coma is possible if the patient is ever healed back to above fully-negative HT.
The ESU can perform less critical tasks, such as blood transfusions (it includes enough generic blood substitute for two whole-blood transfusions) and revival of persons in suspended animation.
An E cell powers it for 100 centars. An ESU weighs 120 pounds (with power cell).

A FEW of the medical substances in the Colonial Fleet. More will be added later.

Drug Patch
Any drug that is deliverable by injection or pill is also available in a drug patch. A drug patch resembles a two inch-square adhesive plastic-strip bandage with a peel off cover. However, the bandage contains a DMSO solution soaked in a particular drug. When the patch is applied to bare skin or thin clothing and pressure exerted on it, a dose of the drug will soak through the skin into the subject. The effect is exactly the same as an injection of the drug. (If the drug is only available in pill form, treat it as an ingested dose.)
A drug patch can be used in combat — simply peel off the patch’s protective cover and stick it onto the target using DX or Brawling skill. Slapping a bandage onto someone is a bit slower and more awkward than punching them, though: -2 to skill. A drug patch costs 10 cubits more than an ordinary single dose of the drug and weighs less then an ounce.

Averzine
This is a family of drugs used primarily as aversion therapy for mild psychological drug addiction and alcohol abuse. Averzine comes in several versions each of which is targeted against a specific addictive recreational or performance-enhancing drug, or against alcohol.
The effects of a dose of Averzine lasts for 2 sectarie: if the user takes the substance that particular brand of Averzine is targeted against during that period, within 1d centons the user will experience nausea for the duration of the drug’s effects plus at least 1 hour afterward. This will result in the user feeling very unpleasant: a -2 on any DX or IQ rolls.
Averzine does not alter the effects of the substance it is targeted against; it just makes the user feel awful immediately after he takes it. Thanks to this aversion therapy, an addict or alcoholic that is using Averzine gets a +2 to Will for daily rolls to resist temptation. This isn’t much use against a highly or totally addictive drug (those with the -5 or -10 on their withdrawal rolls) but can be enough to help kick a mild habit.
Averzine costs 20 cubits per dose and is available in pill or hypo form. Averzine may not be available for all addictive drugs.

Wideawake
This drug is a time-release capsule that releases carefully controlled doses of stimulants that prevent sleep without causing much in the way of side effects.
A dose of the drug prevents the user from falling asleep for 60 + 3d centars and eliminates all Fatigue taken for loss of sleep. After that period wears off, the user suffers 2d+15 Fatigue that can only be eliminated by sleeping for a long period (recover 2 Fatigue per 4 centars of sleep). If the Fatigue suffered results in unconsciousness, the user will sleep immediately and cannot be awakened until all Fatigue wears off.
Taking more than one dose of Wideawake extends the period of wakefulness by 2d centars, but adds 5 to the final Fatigue loss. A Wideawake user is at +3 to HT resist sleep gas, sleep poison, or drug.
Anyone who has been awake for more than 48 centars thanks to Wideawake will be at -1 IQ (and -1 to all IQ-based skills) due to the cumulative effects of the drug. The penalty increases by a further -1 every 24 centars after that: -2 after 72 centars, -3 after 96 centars, and so on. Wideawake is available only in pill form, and costs 20 cubits per dose. The drug is non-addictive.