Despite a thousand yahrens of war, the Colonials really don’t know a lot about their primary enemy. Their origins, motivations and ultimate goals remain largely a matter of speculation, second hand information, rumor and popular belief.

The Hassari were the first known race to encounter the Cylons, and the Hassari had an extensive period of contact with the Cylons before their relationship degenerated into all out war. Most knowledge of the Cylons comes from the pre-war period of Hassari contact. What information the Hassari passed along has not been confirmed by any other source.

According to the Hassari the original Cylons were a war like, reptilian race that built the mechanized Cylons to be the ultimate soldiers. Over time, as the creators birth rate and population size declined, they ceded more and more control of their society to increasingly intelligent machines. Eventually the machines evolved a will of their own and turned on their creators. The original Cylon race was wiped out.
What motivated the new Cylons to become a xenophobic, galactic terror is unknown. It is speculated that this reflects some residual aspects of the creator society. Possibly, as their numbers dwindled the ancient Cylons degenerated into racial paranoia and madness which caused them to lash out at the rest of the galaxy. This behavior may well have carried over to the machine Cylons.

Silver Centurions and Drones
There is a single electronic ‘brain’ in the Silvers and Drones. It is a sophisticated piece of hardware, able to do many things, learn and process information and make decisions within the parameters of its programming but it is nonetheless essentially a computer. A certain percentage of Silvers and some Drones have a hardware and software upgrade to allow more advanced decision making and a greater self awareness. These serve a ‘supervisor’ role or that of a low level NCO in the military. For example the ‘Command’ Cylon in a Raider.

The Silver Cylon or Centurion is the familiar and feared Soldier of the Empire. They are a bit over two metrons, about seven feet, in height and weigh in around 375lbs. Encased in shining armor that protects their inner workings and is sealed against most environmental effects they have become a symbol of terror and dread throughout the known galaxy.

The Drone is the worker Bee of the Cylon hive. They do virtually all the drudge tasks of Cylon society. They operate machinery, do the primary repair work, build ships and, structures. They operate under the supervision and control of the Citizen Cylons. Drones are not armored. Their frame is metal but their outer casing is plastic or similar material.

Gold Centurions and Citizens
These Cylon models actually contain two ‘brains.’ The Core brain is similar to the ones found in the Drones and Silvers. It provides for the basic operation of the robot body. The function of the second ‘brain’ is still unclear to Colonial experts. However there is strong anecdotal evidence that Cylons will make an effort to recover this brain from fallen Gold Centurions if the body cannot otherwise be recovered. Also of note, Gold Centurions always have names, this is not the case for Silver Centurions.

Physically the Gold Centurions, or First Centurions, appear identical to the silver except for color. However there are a few minor differences. Gold Centurions have the ability to communicate with ILs by means of scrambled, short range radio frequencies. The armor of a Gold is tougher then a Silver, it is protecting more valuable components. They are a bit stronger and faster, generally more heavily built and are smarter then a Silver. Average weight is 400lbs.

The shiny surface of the Centurion armor (both Gold and Silver) is actually a reflective coating designed to dissipate and reflect some of the energy from a laser attack. This greatly reduces the effectiveness of the common hand lasers carried by most races and is why the Colonial Military switched to Blasters as their standard sidearm. 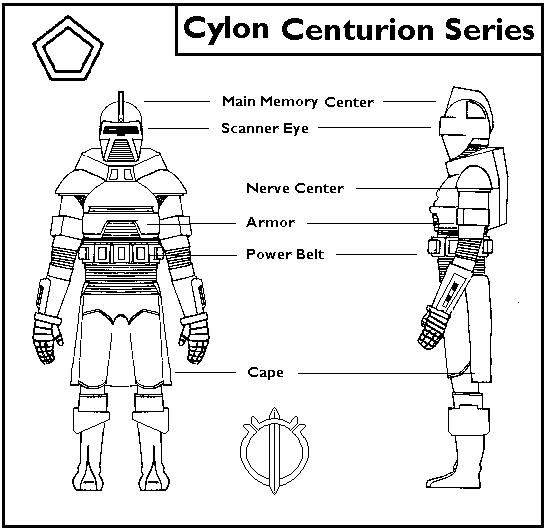 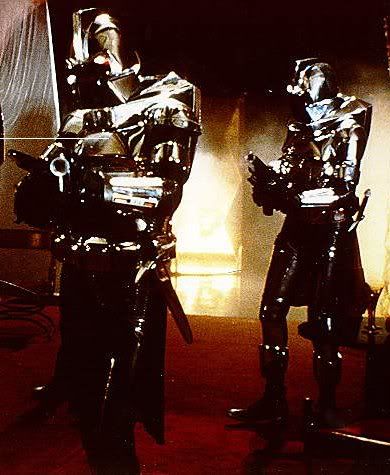 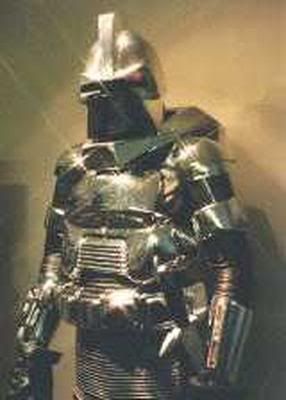 Citizen Cylon bodies are usually smaller then a Centurion, average about six feet and 250lbs. Made of composite materials and unarmored. Appearance can vary quite a bit in regards to colors, height, and differences can manifest itself in different voice modulations. Citizens provide the same supervision and leadership to the Drones that the Golds provide to the Silvers. In someways they do more in this regard because there is no upgraded Drone with leadership abilities.

The IL Series
The IL Series of Cylon are probably the most dangerous of the Cylons. They are the thinkers and doers of the Empire. Evidence indicates that they alone have true initiative, imagination and the ability to think on their feet. They have a sense of worth and will not needlessly sacrifice themselves. In civilian duty, they are the great scientists, politicians and nobles of Cylon society. In military duty, they are every bit as capable as First Centurions and can be found advising them, leading them or leading a Baseship or garrison on their own.
Appearance can vary dramatically and ILs are known to change their bodies periodically. Generally smaller and lighter, about the size of a human male, their bodies are usually of advanced composites giving light weight with strength. 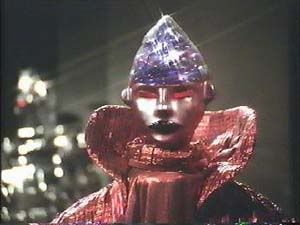 The Imperious leader is an IL Cylon. According to Baltar’s information (the only human known to have been in the presence of the Leader of the Cylons and lived to tell.) The physical appearance of the Imperious Leader is reptilian. Presumably the form of the original, organic, Cylons. 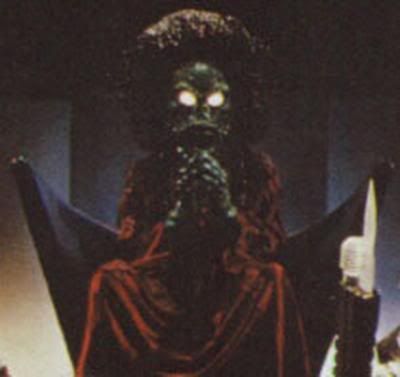 Cylons and clothing:
It has been a matter of some speculation as to why Cylons, at least some types, bother with clothes. Weapon harnesses and utility belts on the Centurions make sense, but there is more to it then that. Citizens regularly wear clothing, usually of varying colors and styles. IL series Cylons wear elaborate clothing, as does the Imperious Leader. Even lowly Drones are often found with simple robes. Most of the Silver Centurions wear nothing other then a belt or harness for weapons, but those designated as Leaders often wear a sash or kilt similar to Golds. The Golds generally have sashes or kilt like outfits.
It is believed that this is some form of imitation of the Creator Cylons, perhaps a hold over in programming from the creators who wished to soften the appearance of their robot servants.