Despite the obvious visual difference in their skin color, which is a dark blue, Orions are the closest, physically, to Humans of any of the known alien species. But, despite their physical similarities, it is genetically impossible for an Orion and Human to reproduce. Xenobiologists, of both species, speculate that there seems to have been some common genetic material somewhere in the distant ancestry of Orions, Humans and, disgustingly enough, Borays. How this could be, considering the interstellar void that exists between the Human homeworld of Kobold and the remote Orion, is a matter of wild conjecture.

There are a few differences between Orions and Humans. Taken collectively they tend to be a bit shorter and slighter of build then a Human, but, as with Humans, individuals vary widely. Their gestation period is longer then a human and they almost invariably give birth to twins. These twins are genetically and physically, identical. Basically every Orion, male or female, has an identical twin. This twinning manifests itself in some interesting ways. It seems that no matter what the distance between them, Orion twins always know, or sense, the state and well being of their twin. There is no actual communication between them, but if one twin is injured or stressed, the other one knows it. Additionally their lifespans seem to be linked, they usually die within short periods of each other, whether the cause of death is natural, accidental or an act of violence.
Psychology wise there are also many similarities between Orions and Humans. They share most of the same traits, both strengths and weaknesses (the Orions dispute this last) and seek much the same thing out of life in terms of material possessions and general well being. Along with the Delphians, the Orions are the species that Humans are most comfortable with.

Despite this linkage between one half the population and the other, Orion society is heavily fragmented. There is no strong central government, the population lives in City States, both on the surface of the homeworld, beneath the surface and in orbit and on colonies. The City States are themselves made up of clans and family bloodlines that hold higher priority to Orion loyalty then the City State or the Planetary Council. The Planetary Council is made up of representatives of all the Cities and serves as the collective ‘Voice’ of Orion when dealing with other governments. In practice however, the City States tend to negotiate their own deals and arrange Council ‘approval’ after the fact.
Considering this splintered society, it is remarkable that Orion civilization has held together without self destructing long ago. Though the history of the planet is dotted with wars, none of them were ever genocidal, catastrophic or total in nature. It is a tribute to the Orion adaptability and diplomatic astuteness that none of the wars ever got out of hand. Some outsiders speculate that the innate empathy of twins, and the social practice of marrying and separating twins geographically, are both a result of and cause for, the limited nature of the wars.

Probably as a result of this constant underlying strife between the Cities, Trade and economics were highly evolved and developed on Orion, and have been carried off world to a point that is almost obsessive to outsiders. Orion wheeling and dealing is legendary and the butt of many jokes and stories amongst Humans and Delphians. It is widely said that an Orion can make a deal with Death, and Death will come up short.
Orion and its client worlds, (known as the Orion Trade Group, where each world is dominated and controlled as a client of a City State) are located far beyond the (immediate) reach of the Cylons, or even easy trade for Humans and Delphians. Orion Traders however are famous for crossing the vast gulfs of space in search of new markets, new commodities and goods, and anything that will give their Clan or City an edge over its rivals.
Orion Traders are famed for their willingness to buy and sell, just about anything to, or from, anyone. Orions pride themselves on being neuteral in relation to offical government policies, racial tensions and animosities. They will deal with any and all races, pirates, law breakers, even Cylons. They will deal in commodities, technology, weapons, artifacts, people, illegal or stolen merchandise and information. In short, anything that they think can earn them a profit.

Orions, despite their present safety, recognise the danger presented by the Cylons, and know that someday they will have to confront them, (and cut a deal) so they have aided the Colonials and Delphians with access to technology, materials and resources (at a very favorable price) in their war against the Cylons. 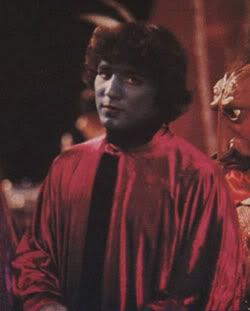 Technologically speaking the Orions are very close to par with Human technology. They seem to adapt devices, designs and ideas from all the groups they trade with (which is just about everyone.) Picking and choosing what works best for them.
If they can be said to be ahead of Humans in any area, it is in robotics and artificial intelligence. (Of course the Orions haven’t spent the last 500 yahrens fighting robots with artificial intelligence, a fact that puts interest in designing the fraking things more or less on the back burner for humans.)
Orions employ robotic workers and soldiers on a regular basis. More of their ships are automated then a Human, or Delphian, ship would be. This allows for smaller crews (and higher profits!) It may also account for the Orion confident attitude that they will be able to handle the Cylons when the time comes.

One of the many kinds of robots built in Orion factories 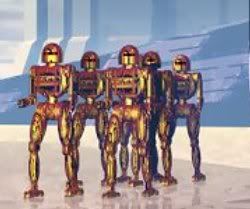 Orion small arms include both lasers and blasters. Personal preference seems to be the only deciding factor. However, Orion hand lasers are similar to Delphian lasers in that though they can both kill and stun, they are a bit underpowered for taking out Cylon Centurions. Since the Orions have, so far, avoided confrontation with the Cylons, this has yet to be an issue.

From all appearances the only ships that the Orions build are their enormous trade vessels. Commonly called ‘Long Ships‘ or ‘Orion Traders’ Although they are often bigger, in length, then a Battlestar, they are not as  heavily armed and armored and usually carry only a small contingent of sublight fighter craft for defence.  However their size, and the automated factory ability of self repair, makes a Long Ship a formidable opponent.
More then a simple freighter, the Long Ship encompasses factory space and is able to build or replicate goods that the customer wants. Heavily automated and with many robots (Droids) filling labor posistions, the Long Ships travel for yahrens in search of a profit for their Clan or City State. 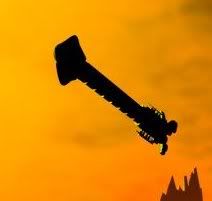 Orion Fighters are primarily a defensive weapon system. They operate very well in atmosphere as well as in space, but they are sublight craft and are not intended for major engagements. 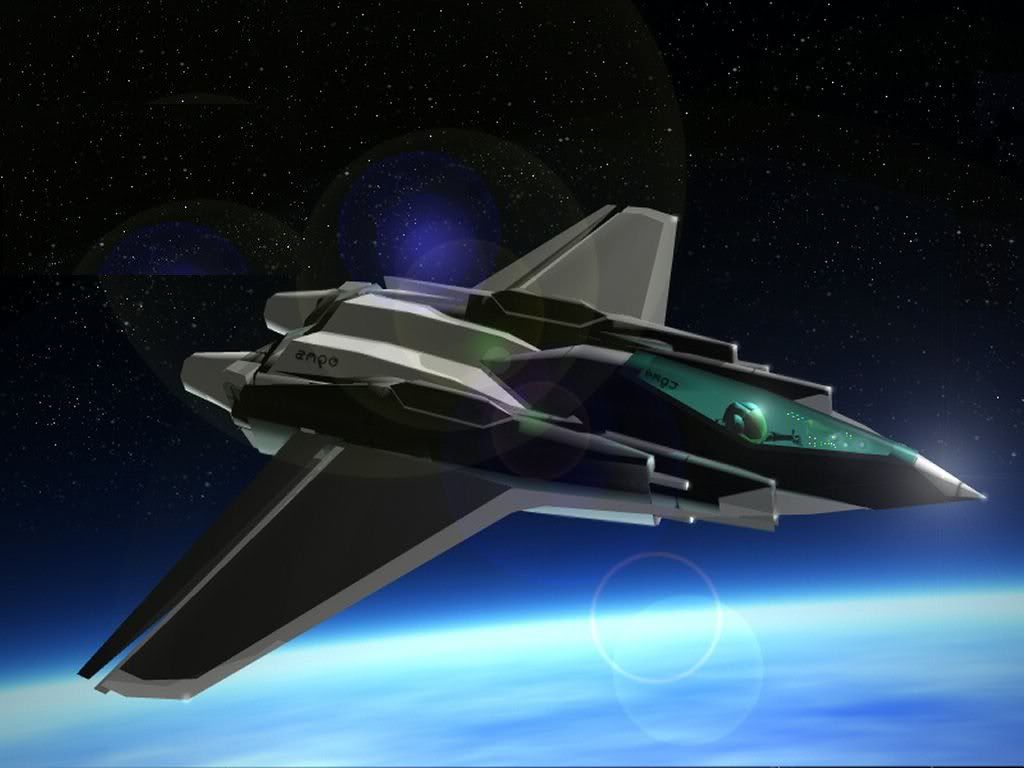