Exactly where the Rutallah and their allies the Shagar, originate is unknown. They do not share information willingly and no exploration has ever turned up a likely homeworld.

Rutallah
The Rutallah are a bipedal, reptilian race (many have wondered if there is, or was, a relationship with the ancient Cylons) about the size of a human. They are carnivorous and their preference for eating their food alive puts off most humans who have had any extended contact with them. The coexistence of the Rutallah and Shagar (see the description of the Shagar) is greatly benefited by the fact that the Rutallah do not have a sense of smell. Like many reptiles their tongue provides their taste/odor sense and they are sensitive to heat sources, being able to ‘see’ to a limited extent in even total darkness. However, distance vision, in the normal ‘human’ spectrum, is limited. They are sensitive to motion, but do not see detail well over long distances. Rutallah rely extensively on technological devices to augment their distance vision. Though not much stronger then a human, Rutallah are remarkably resistant to injury, (partially because their scaly skin is tough and hard to penetrate and because bleeding is minimal.) They are apparently immune to organic poisons and heal quickly from wounds.
There is a slight size difference between the male and female Rutallah, but the most visible difference is in colorations and scale patterns. Male and female genitalia are hidden by scales. The species is an egg layer, generally producing one egg at a time with the female carrying the egg for well over a yahren and incubation for another yahren. This means that reproduction rates are low. Males tend to hold leadership roles in Rutallahn groups, primarily because carrying and caring for the eggs are a debilitating and time consuming task. However, females are held in high regard and their opinions regularly sought and their desires are generally deferred to by the males.

Their society, if that is what you call it, is aggressive, militaristic and acquisitive. They seem to be almost nomadic, rarely settling on a planet for an extended period of time. Rutallah bases are built for a purpose, mining materials, harvesting food, conducting repairs, and when the task is complete they abandon them to move on. Rutallah seem to have an odd relationship with things. Though greedy, rapacious and acquisitive when it comes to obtaining wealth, goods and material possessions, they seem almost careless about retaining them. When Rutallah finish with a project or have used a device to their satisfaction, it is not at all unusual for them to abandon it. They don’t leave behind just anything, a Rutallah never abandons personal weapons or things that might put the ship at risk through their absence. But an abandoned Rutallahn structure may still have furniture, clothing and a variety of tools and devices left behind. Xenologists speculate that perhaps in a semi nomadic Rutallahn culture on their home world, such a structure would be untouched by other Rutallahn and available to its owners for reoccupation at a later date. In galactic terms this is impractical but the habit nevertheless remains.
Rutallah technology seems to be adopted from a wide number of races, picked up piecemeal and adjusted to their needs. The ships they use are generally built, or at least designed, by other races. One would be hard pressed to identify a particular device or technology as being Rutallah in origin.

Though nominally traders, most Rutallah are little better then pirates, and often ally themselves with pirates. Fortunately their numbers seem low, at least in the part of the galaxy that the Colonials dwell. Except for the Cylons, compared to whom they are insignificant, the Rutallah (along with the Boray) are one of the most despised species in the known galaxy. 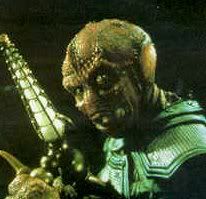 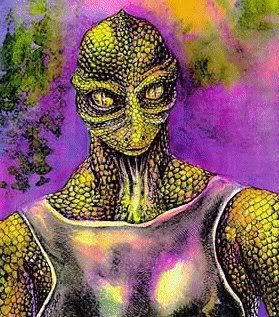 Where ever you find Rutallah you will also find Shagar. Exactly why this is true is unclear. The Shaga, a bipedal, mammalian creature seems an unlikely ally to the reptilian Rutallah, but the relationship appears long standing and close.
Shaga (collectively they are Shagar) are primarily carrion eaters, their digestive tract does not allow for the processing of fresh meats, instead relying on the biological breakdown of the flesh by outside bacteria. (Those humans who have spent time on a Rutallahn ship report an environment of horrendous odor, from decaying flesh, and horrific shrieks and sounds from the live food stored and consumed by the Rutallah.)  Shaga are apparently immune to almost all diseases, parasites and most poisons. They also posses a remarkable regenerative ability in regards to wounds and injuries, making them extremely difficult to kill. Shagar have acute senses, particularly smell and hearing. Shaga skin is invariably white, leathery and possessed of short, fine white hair that is all but invisible except up close. Their claws and fangs are dangerous weapons and wounds from them invariably fester, both from the bacterial contamination present and from a low grade venom that the creature’s saliva carries. The bite delivers this venom, and the claws also, primarily from the Shaga’s habit of licking its claws incessantly.  The Rutallah are immune to this venom.
Despite their brutal and savage appearance, their lack of clothing and appalling personal habits, the Shagar are reasonably intelligent, though at best semi literate. They can be taught many of the functions of a ship’s crew, serving as such on Rutallahn ships, the use a wide range of technological devices and can learn to at least speak a number of languages.
One irritating aspect about the Rutallahn/Shagar symbiot is that when the Rutallah abandon a facility, site or structure, they always leave behind Shagar. These creatures can breed prolifically and become a major ecological menace to a planet and its inhabitants. It is speculated that the breeding of Shagar on the ships requires a certain number to be regularly left behind in order to keep the population under control.
Shaga give birth to litters of three to five in number, gestation is short, and they mature quickly. Despite the lack of clothing it is difficult to distinguish male from female, except for an expert, in that the male Shagra’s genitals retract into the body during most activities. In most other respects the two genders are all but identical. 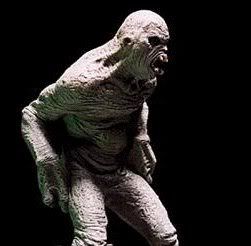 Though the Rutallah tend to make use of what ever they come across in the way of equipment and technology, there are a couple points worth noting.

First are Rutallahn Stunners. It seems unlikely they developed these themselves, but anything is possible. What ever the origin the salient points are that it is an area of affect weapon, able to stun more then one person with a shot. The target area is several metrons across at maximum range, which is about a hectar long.

The primary Rutallahn side arm is a rocket firing pistol. The weapon launches these tiny, armor piercing, explosive, smart rockets at a very high rate of fire. The rocket can accelerate out to about a hectar in a straight line, coasting another hectar thereafter. The rocket can be programmed for specific behavior, seeking out particular races, even tracking a running individual or turning a corner. Maneuvers such as turning a sharp corner can drop the acceleration distance by as much as 50%. It is speculated that the Rutallah favor these weapons to compensate for their weak distance vision. Testing by Colonial scientists has shown that though the armor piercing ability of the rockets can penetrate Cylon armor, it works best at short ranges, anything much above a hectar and the penetration rate drops dangerously.

Rutallah Rocket Pistol being examined by a Colonial Tech. 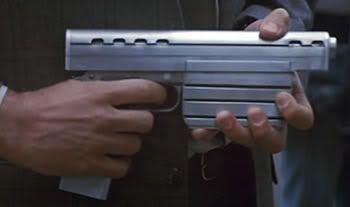 Rutallah regularly carry one or more knives, called ‘Talons‘ on their person. Though they are by no means a ‘technological’ item, it is worth noting that the wounds inflicted by the Talons fester in a way similar to a Shaga’s bite or scratches.

Like most Rutallahn technology their ships are acquired rather then built. They run the gamut from old rust buckets to modern freighters. However, they do seem to favor certain characteristics.  They like ships that are tough enough to stand up in a fight, have a decent sized hold and plenty of living space. They also want ships to be small enough to land on their own, without the need for lots of shuttles. 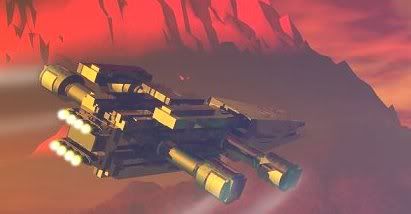