Cylons use space mines prolifically. They litter the approaches to star systems, planetary orbits, interstellar dust clouds, asteroid fields, the outer rim of star systems, in short just about anywhere they want to deprive their enemies use of or access to.
Not every object in a minefield is an actual mine. A wide scattering of general metallic debris will stretch a mine field over a much larger area, sprinkle it with a few actual mines, and a ship entering the field is forced to treat every object it ‘sees’ as a real mine.
Many Cylon mines are nuclear, but the bulk of a mine field will be conventional. Nuclear mines require extra shielding to make them undetectable and even then as the weapon ages it becomes possible for scanners to identify them as such.
Cylon mines use solar cells and batteries for power. Since all systems are basically passive, very little energy is required to remain functional.
Intermingled with the Cylon mine fields are Cylon probes that monitor the status of the field and warn the Cylon command of intrusions. 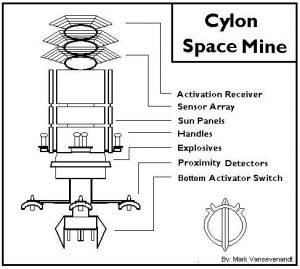 As numerous as the Cylons are, space is still too vast for them to have a military presence everywhere. To extend their reach, and enhance their view, the Cylons use a variety of Reconnaissance Probes.
As has been noted before, the Cylons never seem to throw anything away. Nor do they make any effort to substantially upgrade their equipment, especially if the upgrades involve hardware. Colonial Military Intelligence has concluded that the Cylon military machine is simply too large and spread across such an immense area, that regular upgrades are simply impractical. Consequently, obsolete probes are still used extensively by the Cylon war machine. The designations are from the Colonial Military.

A stationary probe that has no maneuvering ability. It drifts through star systems much like a space mine. Unarmed, with no armor and limited active sensors, these probes are easily destroyed. Their communications are, however, quite good and they can send an alert over vast distances. An upgraded production model (Class Ia) that came out late in the Class I career had improved stealth capacity, making them very hard to find. Their nuclear batteries, combined with a small solar panel array, give them an active lifespan of about eighty yahrens.

Essentially a Class II that has had a light laser added for defense and limited attack ability. This armament is considered a joke by Viper pilots who’s superior firepower can destroy the probe from a safe distance.

The first Cylon probe with limited FTL ability. This allows the probe to make its way from system to system without the need of transportation. All the earlier probes needed to be placed by a Cylon ship. The FTL ability also makes the Class IV harder to destroy. Once it has sounded an alert, or ‘sees’ a threat, the probe goes to Hyper Speed to escape. The Cylons continued arming the Class IV with a single light laser.

This is the latest model (that the Colonials know of) of Cylon recon probe. It is the first type that presents a serious threat in a combat situation. Especially a surprise situation. Basically a Class IV probe with an improved FTL system and, instead of a light laser, it slings the Cylon equivalent of two medium torpedoes under its belly.

The Cylon Laser pistol and laser rifle are both powerful and efficient weapons. The firepower of each weapon is better then any other laser of similar size. The Cylon lasers extra power is reflective of a beam emission material that has the side effect of generating unhealthy doses of radiation with each shot. This radiation is utterly harmless to the Cylons but can have serious side effects to organic creatures. 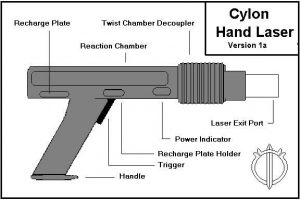 Cylons have a variety of surface vehicles for both combat and non combat uses. They are often ‘open’ type vehicles since Cylons in general are little impacted by weather and are themselves very well armored.

Cylon Mobile Light Laser
One of a variety of Cylon Field Weapons that they deploy as needed. Cylons prefer directed energy weapons or rocket type weapons over ballistic or projectile systems.