A little studied, bipedal, multi armed, insectoid creature. They dwell underground in hive type societies. The largest of the Ovion hives on record was found on Carillion in the Tylium rich rock that planet. Ovion hives are often found near Tylium deposits and the hives trade Tylium for technology they cannot themselves produce. Whether this Tylium/Ovion connection has deeper meaning then a trade item is still a matter of speculation. Some xenobiologists theorize that the Ovions may need the presence of Tylium in their environment to aid in reproduction, since the few Ovion hives found without Tylium were small and the creatures stunted in growth. Of course they also lacked access to technology which may have been the inhibiting factor.

Ninety percent of the Ovion hive is female. Males, the few that exist, called Breeders, are there only for breeding and are themselves barely sentient.
The bulk of the population are Drones, female workers that build, dig, fight, gather food and tend the young. Of middling intelligence, they are able to carry out orders, employ most technology and have some initiative in matters of safety to the Hive. However they lack advanced reasoning ability and have little capacity for ‘thinking ahead.’
Next are the Brood Queens. Special females whose only function is to mate with the males and push out Drone larva. Like the males they have little intelligence and are fed and cared for by the Drones.
At the top of the hive is the Queen Mother. It is her advanced intelligence that directs the hive activity. Only the Queen Mother can produce larva that can develop into either males or Brood Queens.
The larva, of all types, are removed from the Queens by the Drones. A special cocoon is woven from secreted silk, something that the Brood Queens and the Queen Mother are capable of making. The larva are then inserted into the cocoon, along with a living being of sufficient size (adult Human, Delphian, Drone, extra Male Breeder, etc. Ovions aren’t fussy.) A chemical property of the cocoon stupefies the creature, but does not kill it. The larva feeds on the creatures bodily fluids until it is dead, at which point a second property of the cocoon, enzyme secretion, helps break the body down into a digestible goo that will sustain the larva for weeks, until it reaches sufficient size and development to break out of the cocoon.
There are many questions still to be answered by scientists concerning Ovions. How long does the Queen Mother live? How intelligent is she? How does the Hive replace her upon her death? The presence of Ovions on more then one planet is indicative that they have, or had, access to star travel. However, there are no known records of Ovions operating or employing starships. So how the travel was accomplished is a mystery.
It is widely believed that Ovions are allies/servants of the Cylons. And though that was certainly true of the Hive on Carillion, there is no evidence that it is collectively true of the entire species. On the other hand, maybe it is true. 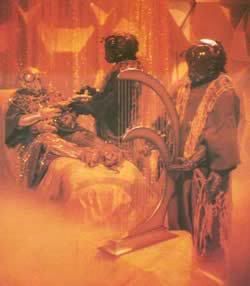 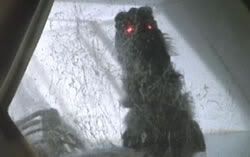